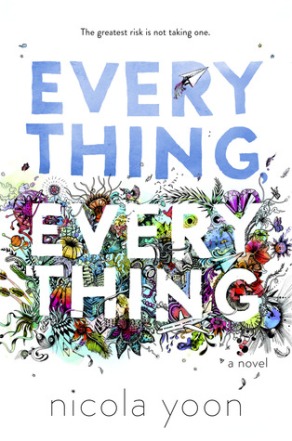 “My disease is as rare as it is famous. Basically, I’m allergic to the world. I don’t leave my house, have not left my house in seventeen years. The only people I ever see are my mom and my nurse, Carla.

But then one day, a moving truck arrives next door. I look out my window, and I see him. He’s tall, lean and wearing all black—black T-shirt, black jeans, black sneakers, and a black knit cap that covers his hair completely. He catches me looking and stares at me. I stare right back. His name is Olly.

“Everything’s a risk. Not doing anything is a risk. It’s up to you.”

I don’t read many YA contemporary/romance books, but usually when I pick up one, they turn out to be much better than I first anticipated. This one was no exception, despite it’s flaws.

After reading the synopsis, I was hooked. The premise sounded intriguing to me and I wanted to know exactly what type of disease this was. I was hoping to get a bit of insight into how someone with such a rare disease (SCID) lives day to day. I was wondering how an individual with such an intriguing condition can fall in love and become close with someone else. Yoon managed to form a lovely little romance between the two MCs, but I’m not sure I received the type of story I was expecting.

The strongest aspect of this story is the writing. Yoon’s style is lyrical and wonderfully clever. There is no shortage of humor and cheerfulness in the interactions between Madeline and Olly.  I enjoyed their conversations and I also enjoyed the different forms of storytelling. We’re treated to an assortment of journal entries, images, IMs, and other little documents that contribute to the uniqueness of the book as a whole. I also really appreciated Yoon’s inclusion of an ethnically diverse cast of characters.

With that being said, I had an issue with how quickly Maddy and Olly’s relationship formed. It felt a bit rushed, especially since I felt that I did not know much about either of them. Only a few details were revealed about Olly’s past, and so I had a hard time believing in his character. Maddy was much more relatable; however, she too was a bit of a mystery. Just like Olly, her backstory was peppered with holes and missing information that could have helped to develop her character further. If their own individual stories had been cultivated a bit more, the romance wouldn’t have seemed so sudden. I’m not much a fan of the insta-love story and this was definitely a swift-burning romance that burned a little too bright for no apparent reason.

My biggest qualm with this book is the ending, which I have dubbed the second biggest cop-out since the series finale of Lost. (I’m being dramatic, but really, it was a very disappointing way to end the story). I won’t spoil it for you, but all I’ll say is that I felt a bit cheated in the last quarter of the book. The author leads us to believe the story is about a girl and her rare health issue, but then it transforms into something else entirely by the end. I understand it was meant to be a “shocking” turn of events, but for me, it lessened the impact of the story as a whole and resulted in a missed opportunity for both the author and her readers to understand SCID and its effects.

No matter my issues with the book, I found it to be a very enjoyable read. There were several elements I found memorable and there were some I believed were unnecessary. The romance was quick but sweet, the dialogue was engaging, and the characters were interesting albeit slightly underdeveloped. It was a familiar yet somewhat unique story that held my attention until the very end. I’d recommend it to anyone who’s looking for a light contemporary read filled with lovely quotes and a lovable MC.

“Spoiler alert: Love is worth everything. Everything.”

12 thoughts on “Book Review Time: Everything, Everything | Nicola Yoon”